Hi! I'm Lori, I love being a mother. It requires unleashing your inner superhuman, but it’s the most rewarding job of all time. 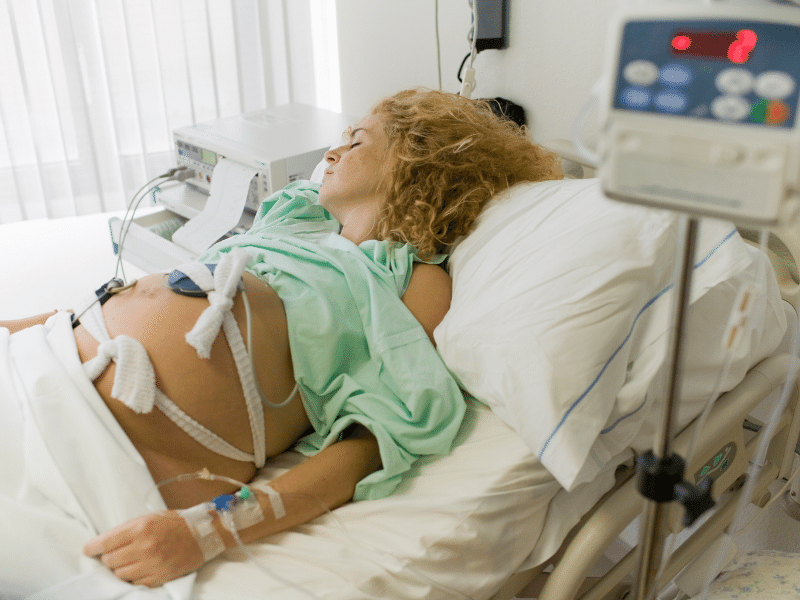 “Mummy, how does the baby get out of your tummy?  Is there a door?”  My 4 year old raised a good point.

There should be a door.  I answered with a vague story about a temporary tunnel opening up for the occasion, omitting all the scary details.

But the question got me wondering:  why do we have to endure such extraordinary pain to bring our young into the world?   I don’t see other animals (except possibly elephants) suffering like we do in the course of childbirth.  It seems that we, humans, are not a very good design.

Nine days ago, I gave birth to my third baby.  It wasn’t too bad, as far as childbirth goes.  It didn’t go exactly as I’d imagined in my fantasy, but it was pretty close.  In fact, I’d say it was better.  Here’s the story.

I was scheduled for induction at 5 am.  I was pretty keen to spontaneously erupt, so the night before D-day I walked up a small mountain, pressed the relevant acupressure points, jumped on the trampoline etc.  Mild contractions started at 3 am.  Yes!  I was going to beat the induction.

Mum was home, ready for the kids to wake up, so hubby and I headed to the hospital in the wee hours, as arranged.  We parked a few streets away and walked 10 minutes up the hill to the labour ward.  After admission, I laboured on with not too much pain while the staff changed shift from night to day staff.  I didn’t feel like dancing; hubby was doing his best with the acupressure points, but I was pretty tired and just wanted to lie on the bed.   Someone suggested I try the shower before the day staff came in and got things moving.  So I stood in the shower with hot water on my back and my tummy simultaneously – it felt awesome: I could have stayed there all day, but then the staff were back and it was time.

At 9 am they broke my waters and hooked me up to a monitor to see my contractions.  Because there was meconium in the waters they wanted the baby out soon.  They went about preparing the drip to speed things along.  My contractions were strong enough, but not quite regular enough.  I was having 2 in 10 minutes, but I needed to be having 4 in that time.  Just tell me what to do, I said.  By the time the drip was ready, I’d been having 4 strong contractions every 10 minutes.  Keep this up and you won’t need the drip at all, they said.  Yes!  I beat the drip.

The contractions gained intensity and I found myself asking for the gas. My moans were getting louder and longer: I was so uncomfortable on the bed but unable to move.  The gas spun me right out,  the radio was playing trippy music and only the pain of contractions kept bringing me back to earth.  I think I even slept between contractions at one point.  This went on for an hour before I started to feel pressure down below; I was gesturing to my bits during contractions: words had gone out the window.  The pressure kept getting stronger, and I knew it wouldn’t be long before baby was out.

“I think I want to push soon.  Tell me what to do!” I said to my midwife.  She said she’d get the baby doctor here soon so I could start pushing with the next contraction.  At this point, contractions were so painful that I was howling through them.  I tried to breath, I tried to relax, but all I could do was scream and howl, and suck on the gas.  The pressure was getting unbearable; I was gesturing wildly.  I had a strong feeling that the baby would be here very soon.

“OK Lara, with the next contraction, I want you to push.  No more gas, no more screaming.  Hold your breath and push”.  The next contraction came and I started screaming but my midwife told me firmly, once more, how to shut up and push, which is what I needed to hear.  I located the switch in my brain that flicked from dealing with the pain to using the pain: I began to push.  I felt the baby descend in the birth canal, that same feeling of control that I felt when my second son was being born.  It was an “aha” moment… I actually said “oh, right, that!”.  Keep telling me what to do, I told her.

Each contraction my midwife told me again to push, (and how to push), and I flicked that switch and pushed.  Hubby was holding my hand and saying encouraging things- he was down the business end and could see what was going on.  I was flying blind.  I must have been doing something right because there was almost no break between the contractions and the pressure had become searing burning pain.  I was screaming and pushing; I almost couldn’t stop.

“You have to wait for the baby doctor” said my midwife. “Breath, breath, breath” she said.  I breathed instead of pushing for as long as I could but then I couldn’t stop myself… “Pushing! Pushing” I said. The paediatrician must have arrived because I was suddenly allowed to push as much as I wanted.  But I didn’t want to anymore- the pain was too insane.  I looked into my husband’s eyes and said to him “no more babies”.  He agreed with great emotion.  Then, I was pushing; everyone was cheering me on; hubby said “one more push!” and I pushed through the pain and out came the baby.

I was stunned. I’d done it. There was a slimy, bluey-grey baby. One second ago it was inside my body, and now it was here.  Hubby said, “ITS A GIRL!”  In disbelief, I said “No way! I don’t believe you.  SHOW ME!” They lifted up my baby for me to see, and placed her on my chest.  A girl! We have a daughter. Hubby smiled at me with tears in his eyes and said “No more babies”. I was too stunned to say anything.

That feeling of disbelief has stayed with me until now.  I look at her beautiful little face, her perfect skin and dark wavy hair, and just can’t believe she’s here.  I can’t believe we have a girl.  After having two sons, I guess I just expected another boy.  All my friends from growing up have had sons.  In fact, all the girls I know from high school have had sons. Not one of us has had a single daughter.  Until now.

So how did the actual birth compare to my imagined story?  Labour was spontaneous, although racing the induction clock probably helped.  The pain was only really bad from when my waters broke, so for about 2 hours, and I only pushed for about 10 minutes!  Hubby said it was only 5 pushes!  The little lady arrived with no major damage to either of us.  She weighed 3.48 kg and breast fed straight away. There was no need for stitches, and they let us go home the next day.

These last 9 days have been amazing (as well as challenging, of course).  It’s great to be home.  The little lady is quite settled here: she’s used to the chaos of our house.  Her brothers think she’s wonderful, and our families are thrilled.  I was walking the streets today, showing her the world from her pram, and I couldn’t get the smile of my face.  The process of giving birth still seems ridiculously brutal, but it’s so totally worth it.

What Is Child Obesity and What Are the Effects of it

© OiOiBabyBags, 2018. Unauthorized use and/or duplication of this material without express and written permission from this blog’s author and/or owner is strictly prohibited. Excerpts and links may be used, provided that full and clear credit is given to OiOiBabyBags.com with appropriate and specific direction to the original content.